Our socially awkward protagonist faces international bureaucratic turmoil, has some brushes with death, narrowly escapes romance, and sometimes even does both at once. All the while, he and his party of rag-tag witches and wizards try to foil the charismatic magic terrorist and his minions and save as many critters as they can in the process. The social and political landscape are cracking inside and out in the overwhelming state of fear, sparking not just nonsensical lawlessness and street-leveling violence, but one of the worst things that can happen to an adventure – BREAKING UP THE PARTY! The second film ended with some major life choices for each of our main characters and a prelude to war with the Non-Maj world.

What’s that? What about that other stuff? You thought I’d skip the most important parts? Never!

You’re obviously here because you want to see some of the cute fantastical beasties we’ve met along the way, so here you go:

Would you have guessed that these 3 are among my most favourite?

So… now that you’re basically caught up, let’s talk about the new movie!

FANTASTIC BEASTS 3:
The Secrets of Dumbledore

This 3rd chapter appears to have jumped us forward a couple of years, and you can start to see signs that we’ve moved out of the vibrancy of the Roaring 20’s and into the early years of what we no-maj’s will come to call the Great Depression. Our favourite baker would surely agree.

This recession has not been unnoticed by the witches and wizards of the US and abroad who are still facing turmoil, fear, and instability following the various plots and plays made my Grindelwald and his followers in the previous chapters. As you’d expect after the untimely death of the last, the international wizarding communities are preparing to choose a new ‘Supreme Head of the International Confederation of Wizards’ and they’re running the candidates in a backward half-democracy, half-supernatural-choice election system that, rather obviously, leads to magical cheating and similar shenanigans.

Our series hero, Newt, is doing exactly what you’d expect him to be doing when trouble strikes, and he must call upon help to do what motivates him most… saving magical creatures. Albus Dumbledore, middle-aged in the Fantastic Beasts timeline, is in his early years of teaching at Hogwarts, but must recuse himself in light of the trouble at hand. He joins Newt, and with the help of a couple trusted allies (old & new), they hatch a plot to sabotage a plot to save the election, obviously throw a couple secrets around while they’re at it, and ultimately aim to prevent the wizarding world from going to war against the non-magical world. They’re using every trick in the book to try and save the day which brings us to a bunch of new locations, as well as the obvious favourite, Hogwarts School of Witchcraft and Wizardry.

FB: 3’s visuals and effects are stunning! Just like the previous two movies, you’re treated to some real eye candy when it comes to the scenery, the fight scenes, and the magical creatures. Creature & character scenes and live actor interactions were done very smoothly – huge props to the artists and actors for their attention to detail in those close, most detailed scenes!
There were a couple places where the use of or style-choice of transitional effects caused visual confusion about scene locations (ie. NY sidewalk vs. interdimensional spaces), and a particular tea shop scene that seems to have been meant as a simple graphical transition but kinda throws the viewer for a loop when initially trying to determine if the effect was a metaphor or a decent scene literally burning itself to the ground.

We have some new faces in this movie: a couple character’s we’ve never met before, a couple characters that it seems are returning in bigger roles (though it took me reviewing old trailers to recognize them), and also one character who was very publicly recast… Gellert Grindelwald, whose role was last seen portrayed by Johnny Depp in Fantastic Beasts 1 & 2, was recast and in Fantastic Beasts 3 is portrayed by Madds Mikkelsen. I’m most familiar with Mikkelsen’s role as Hannibal Lecter in the 3 season series, ‘Hannibal’, so I’m not unaware of how he’s typecast… and I’m quite pleased with his execution of the role. Good fit, methinks.
I can’t say I agree with the reason for recasting, but since this character is known to wear multiple faces the canon actually supports this option being plausible – even likely to have happened in the span of time between movies.

Beyond the surface, I feel like this chapter has fallen short of the previous ones. Having just watched Newt and his allies make some disappointing and uncharacteristic moves when we closed out FB:2, I was really expecting for there to have been some major character development for these characters in FB:3. Nope. The anticipated development of those established characters was as minimal as their screen time. Instead, this chapter placed most of it’s efforts and focus on new character introductions, long lore detours that don’t seem to have any further place in the ongoing story, and then a heavy dose of Harry Potter series fan-service.

I found the pacing of this latest movie left me feeling that I’d only got to ride the kiddy-coaster when I was expecting something that would go as fast as my bike. Many of the expectedly emotional scenes were too drawn out for an emotional portrayal that failed to happen, likely because the emotions should have been addressed with the missing character development. On the other end of the scale, many of the action scenes seemed to build up energy but stop abruptly, just short of peak suspense or excitement, or were regularly interrupted with long pauses for comedic interlude. I’m going to specifically avoid going into detail about all the ridiculousness in the wizarding world bureaucracy and politics stuff – but will say

~ HOW IN THE HELLS DID NOBODY IN THE ENTIRE FREAKING ROOM SEE THAT HAPPEN?! ~

Lastly, I’m kind of disappointed with how little I got to see fantastic beasts in a series named for them. We have some returning favourites, and we have a couple new types to see, but overall, there is very little screen time given to magical creatures, and creature lore/info is negligible compared to both the previous chapters.

At this time (Apr. 15/22), the producers have not yet confirmed the last 2 parts of the Fantastic Beasts storyline, pending the success (or failure?) of FB:3 in theatres. I think there’s still hope for the series, counting on the hope that it just happened to be a less action-filled, more story progression chapter in the series… but it’s also going to be up to you. Will you see it? Are you going to be wanting and/or willing to see more? I mean… once you see the cliff they left us hanging on at the end, are you going to be ready to walk away? I don’t really like to leave a story unfinished – how can you truly judge if it’s bad without the whole story?

Overall, I would rate ‘Fantastic Beasts: Secrets of Dumbledore’ as pretty good. Not fantastic, but definitely not beastly. As much as I wanted for this movie to match or exceed the quality of the last, I did find it lacking in both mythical creatures and actual substance.

If you’re sold on the nostalgia of Harry Potter and JK Rowling’s Wizarding World – absolutely – go see it in theatres! It is definitely nice to look at and those big screens allow for a whole lot of looking.

If you’re in it for the story, the only thing you’re missing out on by waiting until it’s available on a streaming service is perhaps that particular pair of ladies sitting one row back that decided the whole film deserved a commentary track.

c’mon! who doesn’t want to get the commentary track on opening night?!
talk about premium theatre experience!

Where’s Dumbledore when you need him? And seriously… what’s his secret?! 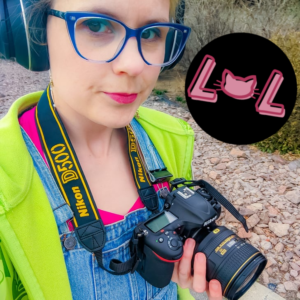 Kona is a multi-media artist, crazy cat lady, and lover of all things nerdy. Kona's creative energies are spent between her role as a self-employed artist, and as a volunteer for a handful of heartfelt causes;
She currently holds a position on the Board of Directors for the West Coast Science Fiction Association and it's subsidiary convention, VCON.
Kona has been writing articles and recording podcasts alongside Brian Daniels and Victor Salazar off-and-on for the last 10 years and is looking forward to further collaborations with them both, now as The Domain.